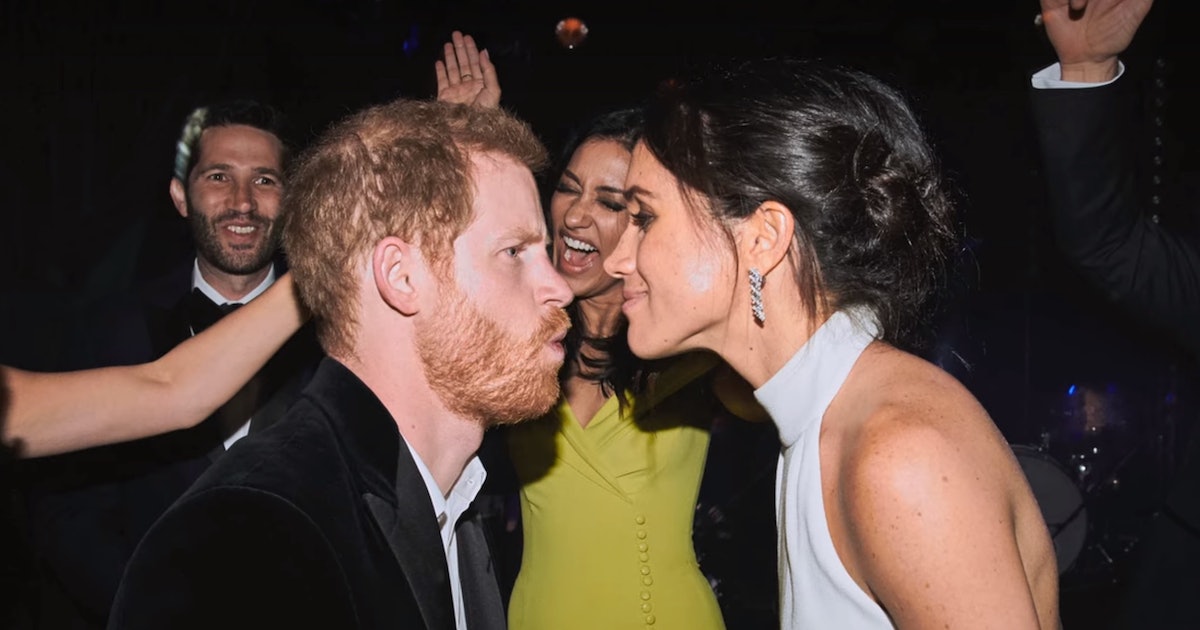 While every single minute of Prince Harry and Meghan Markle’s courtship and marriage have been poured over and dissected by the public, perhaps there is no event that could possibly top the couple’s royal wedding. In the first installation of Netflix’s revealing docuseries Harry & Meghan, the duo dished like never before and shared many personal photos of their love story. And now in the second installation of the six-part series, the Duke and Duchess of Sussex treated royal watchers to a delicious surprise by basically opening up a cinematic version of their wedding album to let us peek at their dazzling wedding reception photos of a celebration that was also kind of a rager.

Though you might not relate to the edgy tradition of cutting your wedding cake with a sword or, you know, having billions of people ogle you in your designer white dress, you will definitely give it up to the Duke and Duchess of Sussex for showing the world that at the end of the day , they’re a whole bunch of fun. Any couple that realizes that the music is the most important part of any wedding, is the kind of couple we want to hang out with. So while all the photos from Harry and Meghan’s wedding are pretty gorgeous, the best ones have to be the shots of the couple cutting loose on the dance floor and proving without a shadow of a doubt that they like to get down. So go cue up Wilson’s Pickett’s “Land of 1000 Dances” (the couple’s fun song choice for their first dance), and take in every detail of these pictures until you convince yourself you were actually invited to the wedding of the century, hobnobbing with the likes of Oprah Winfrey and Serena Williams in their pretty fantastic fascinators.

On the day of her wedding, Meghan surprisingly said that she was able to squash her nerves and enter “a really calm space.” All she wanted was a mimosa, croissant, and to sing “Going to the Chapel” — which is exactly what she did. Behold, the look of a zen bride whose matrimonial pre-gaming included bubbly, French pastry, and this snappy wedding song.

Harry stands beside his well-fed wife.Netflix

Who amongst us wouldn’t kill to get hitched at St. George’s Hall, a venue so regal it “features a ceiling studded with the coats of arms of every single Knight of the Garter since the order was founded in 1348.”

In Episode 4 of Harry & Meghan, the couple revealed how they were able to laser in on each other and block out all the craziness that surrounded them during their wedding. “H and I are really good at finding each other in the chaos,” said Meghan. Move over Romeo and Juliet, these two have perfected the art of the most perfect balcony kiss.

While Harry gushed about his bride during an emotional wedding toast, Meghan seemed to be appreciating how dapper her man looked in his military uniform.

Kate Middleton thinking ahead to when she can toss off her uncomfortable heels and slide into her skinny jeans.

Kate Middleton is all smiles at the family wedding.Netflix

At one point in the docuseries Meghan hilariously mentioned that she couldn’t find her mom, Doria Ragland because she bee-lined to watch Elton John sing. We feel you Doria. After all, “Bennie and the Jets” is her grandson’s fave song.

Doria Ragland has a grand old time at her daughter’s royal wedding.Netflix

Of course Harry’s wedding album needed his beloved “Granny” Queen Elizabeth — the only person on the planet who could possibly threaten to upstage the bride with her feisty fashion and incredible jewels.

Queen Elizabeth never fails to impress with her eye-catching fashion.Netflix

The couple had a good chuckle when they remembered over the sword-slicing of the cake. “I mean, it was great. It was all so over the top,” Meghan said in good spirits. While military-man Harry definitely seemed comfortable with his frosting-laden weapon, perhaps he got some good tips from his late grandmother.

Harry dramatically cuts his wedding cake with a sword.Netflix

A quick dress-change into Meghan’s chic second look signals that it’s time to put those hands in the air and bust a move.

The royal couple party with their hands up.Netflix

No wedding is complete without a gravity-defying dip.

Or some tasteful matrimonial grinding.

Harry and Meghan cut loose to the music.Netflix

Harry and Meghan dance like no one is watching.Netflix

“Why yes, Sir Elton. You may certainly cut in to have this dance.”

Brilliant to see that Harry took copious notes from the choreographer at their couples wedding dance lessons.

It is altogether within the realm of possibility that Harry is requesting that their wedding DJ, Idris Elba, spin some of his fave music: Shaggy’s “Boombastic?”

Harry grins from ear to ear with Idris Elba, his wedding DJ.Netflix

Relic from Harry’s “Party Prince” past. (Every respectable groomsmen photo requires at least one dude in a shirt with one too many buttons undone).

Harry and his boys party it up at his wedding.Netflix

Of course a bride needs her besties too. While Serena Williams made a cameo in the Harry & Meghan docuseries, it was Meghan’s good pal Silver Tree who revealed that they sign off their texts by typing “love wins.” Indeed it did on wedding day.

Meghan’s besties have a great time at the reception.Netflix

Let the royal dance off commence!

Harry and Meghan get serious on the dance floor.Netflix

A snuggly slow song provides the couple with a necessary respite from all their boogying.

Meghan’s mind is officially blown by how awesome her reception is. “It was just brilliant. It was how every wedding should be,” said Meghan’s friend in the docuseries. “Meg was madly in love.”

The royal wedding ended with a bang.Netflix

As the royal couple held on to each other tightly beneath the glow of a sparkling sky, we bet they could never even begin to imagine how their drama was only starting to unfold.

The Sussexes take in stunning fireworks to cap off their epic reception.Netflix

This stuff is seriously juicier than any romance novel ever written.

What Parents Are Talking About — Delivered Straight To Your Inbox