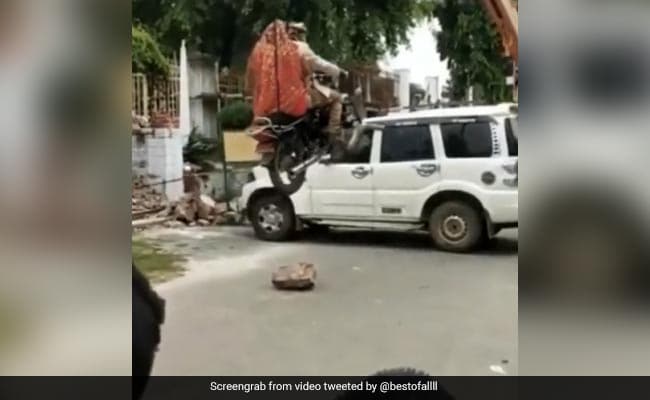 Bride and groom on a flying bike during the pre-wedding shoot.

People spend a lot of money on weddings. Even the pre-wedding shoots have also become a big deal in the past few years. Couples go to the extra mile, fly to exotic locations or come up with innovative concepts to capture the moment. But a video going viral on Twitter shows a couple went the extra mile for pre-wedding shoot. The behind-the-scenes clip has already been viewed 3.2 lakh times and received 7,708 likes. Some users claimed the groom is a stunt director.

The 13-second clip of this shoot has been posted on Twitter by the user Best of the Best. It has been captioned, “Pre-wedding shoots – i’m getting this.”

pre-wedding shoots – i’m getting this pic.twitter.com/Ynwf7Kxr6a

The video shows the bride and the groom sitting on a motorcycle, which is seen launching into the air and flying over a jeep in front before landing safely. The videographers have taken ample precautions as the bike is seen hanging from a rope tied in the shape of a scale, which in turn is being held aloft by a crane.

The rear mudguard is also tied to a rope for balancing the bike.

In May this year, another wedding video caught the attention of social media users for its ‘never-seen-before’ factor. It showed the bride and groom walking together hand-in-hand after setting themselves on fire, literally.

The clip of nuptial pyrotechnics was viewed more than 15 million times. The lovebirds, Gabe Jessop and Ambyr Mishelle, were stunt doubles who work on television and film sets.

In 2019, a couple in Kerala wanted to make their wedding memorable so they chose a canoe to pose for a photo. While they were posing for the candid photo, the couple lost balance and fell off the canoe.

The footage from the photoshoot went viral and left the internet in splits.

Conde Nast said in an article that some couples are making bizarre demands. Ramit Batra, who owns a photography business, told the outlet that one couple requested for a pre-wedding shoot at the Delhi airport runway. He added that planes were landing at the airstrip “just 50 meters ahead of us”.

Another wedding photographer said the most common request is to do something that makes the wedding to go viral.

Featured Video Of The Day