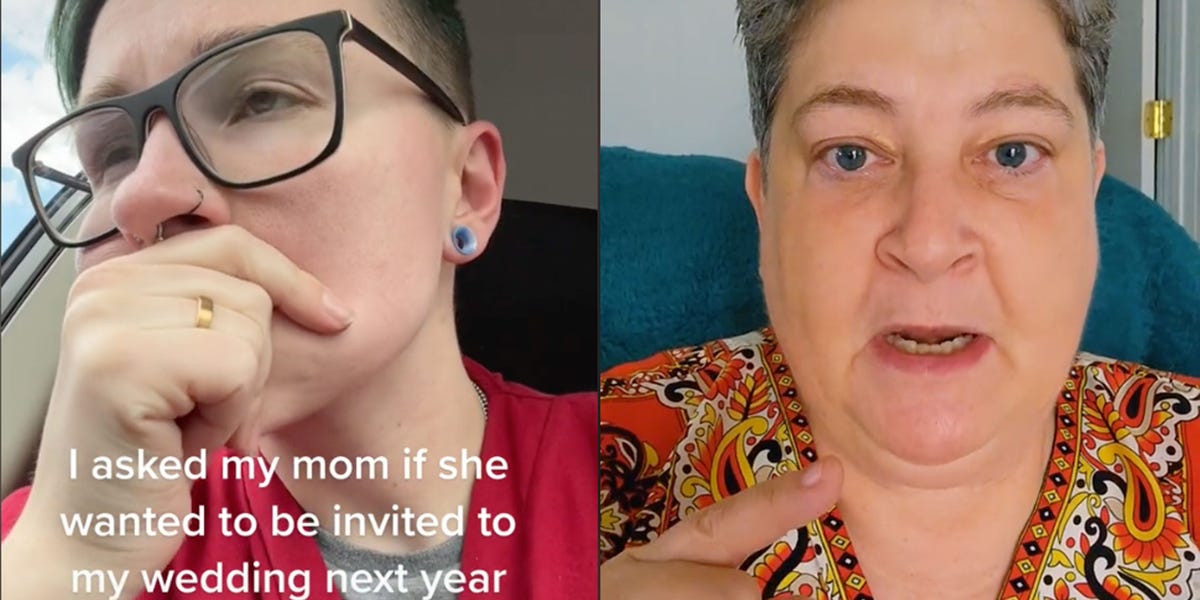 Thanks for signing up!

When 28-year-old Noah, a non-binary person and recent Omaha transplant, posted a TikTok on September 17 about his mom turning down an invitation to his wedding, he told Insider he was seeking the comfort and validation of a support network he hadn’t yet built in Nebraska.

In his video, Noah told viewers he asked his mother if she wanted to be invited to his September 2023 wedding. “She said … she wasn’t sure…” he wrote in on-screen text. “But the ‘issue’ was solved anyway, as she’ll be out of the country the day I get married.” Later, he said he felt “unloved, unwanted.” In his caption, he asked any “mom friends” for “some mom love.”

He didn’t expect the wave of “TikTok moms,” as he described them, who answered his call — expressing anger and heartbreak for him, validating his desire to have her there, and offering to stand in at his wedding in his mom’s absence . (Insider has verified Noah’s identity, but he requested Insider refer to him by his first name out of concern for his and his mother’s safety).

Fifty-six-year-old Caerhl Irey, known as @north_omaha_cat_lady to her 3 million TikTok followers, was one such “TikTok mom.” She told Insider the video moved her and made her “pissed.”

“Where and when?” Irey said in an October 30 stitch video. “Let me know. We will bring aunties and cousins ​​and sisters and brothers and second cousins ​​thrice removed. If your family is not supportive of you, find a new family. I will stand in for your mother,” she said, in part. “We love you. We support you.” The video has since been viewed 3.6 million times.

Noah and Irey connected over DMs and, delighted to realize they both lived in the same town, made plans to meet up for ramen with Noah and his fiance, 25-year-old Bat, who uses they/them pronouns. (Insider has confirmed Bat’s identity. Due to safety concerns, Insider is only using their first name).

“I’m really nervous,” Irey said in a November 13 video that she filmed right before heading out the door to meet the couple. “I feel like I’m meeting my child for the first time.” The TikTok has since been viewed almost 17 million times.

The response from viewers was “99.9%” positive, Noah and Irey agreed. Commenters offered words of support and services for free — a wedding DJ, a photographer — as well as donations to the couple’s honeymoon fund.

“Someone donated $500 to us for this trip,” Noah told Insider. “I threw my phone down because I couldn’t believe it. We have almost $900 towards our honeymoon now because of the generosity of people from TikTok.”

“Having a mom figure love on my fiance means a lot,” Noah told Insider. “That’s something that’s been hard with my family — you meet your person and you want people to love your person.” Watching Irey show affection to his partner was something Noah said he “didn’t know that I needed from her, and I really appreciated.”

Noah, who moved to Omaha in 2019, said the pandemic made it difficult to build a strong in-person support system. To pick out his tux in January, Noah plans to bring his “entourage” of chosen mother figures — one discovered through a midwestern pride organization, and two through his TikTok — and potentially his brother, who he plans to have as his best man.

The couple will be married in Iowa next September. Noah told Insider a couple of his five siblings, some cousins, aunts, and uncles, and his grandmother, who Noah said has “always been supportive,” will be attending.

For Irey, whose TikTok content typically ranges from food reaction videos to jokes about how much she loves muumuus, offering to attend in Noah’s mother’s stead was a no-brainer, partly due to her own experiences with family, both blood-related and chosen.

“My mother was a conservative Christian and Republican, and she had two gay kids and absolutely adored both of us,” Irey told Insider. “Coming out was kind of a non-event because my brother had already come out,” she continued, adding that “coming out of the broom closet” as a non-Christian was a bigger deal.

Irey, who described herself as a green witch, said her mother invited her to say the prayer at her 92nd birthday, the last one they got to spend together before she passed. After Irey’s pagan blessing, she said she looked over to find her mother crying. “She told me it was the most beautiful thing she’d ever heard,” Irey said. “She was born in 1925, and she still saw the beauty in a blessing — even if it wasn’t a Christian one.”

‘I always say: “found family can be better”

Noah said he still holds out hope that his mom may change her mind. Noah told Insider his mother saw the original TikTok, and the two fought, leading to Noah choosing to go no-contact with his mother.

“There will be a small part of me that will always wish that she would be there, that she would show up to my wedding and somehow have a change of heart,” Noah said. “But I know that’s not realistic.” While the decision has been difficult, Noah said he would “make my decision again” for the sake of his mental health.

For Irey, she’s not sure when she’ll stand in at another wedding, though she says there have been requests from as far as London; she has a full-time job as an educator and has safety concerns. But, she does plan to treat Noah as a son from here on out.

“You can’t help who you were born to,” Irey later explained. “I always say: ‘found family can be better.'”

“I want people to know that I’m a real human,” Noah told Insider. “I didn’t do any of this for fame. I intend to give back in whatever way I can.” If there’s anything Noah wants to come out of this unexpected good, it’s for vulnerable viewers to feel a sense of community. He’s not sure what that means yet, but he says he wants to help those who are struggling with similar experiences.

“I want to say, ‘Hey, you’re not alone. What I want to do with my platform is to make people feel less alone. That’s what I stand for and what’s important to me.”

Email tips on all things internet to [email protected]