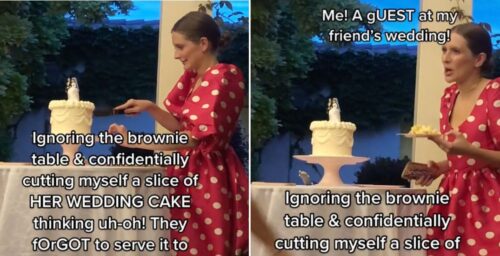 But what about cutting a slice of the wedding cake before the bride and groom?

A TikTok has gone viral catching a wedding guest in the act of doing this exact thing, and the internet is not impressed.

The video, posted by the guest TikTok user @mediocrehailey, shows her slicing into the pristine white cake adorned with a bride and groom cake topper.

She plops the slice onto a plate and even licks the icing off of her fingers.

‘The audacity!’ you may think.

However, Hailey says it was an honest mistake.

“My apologies to the bride and groom,” her caption reads.

Her video explains that she thought they had forgotten to serve slices to other guests.

“Me! A guest at my friend’s wedding! Ignoring the brownie table and confidently cutting myself a slice of HER WEDDING CAKE thinking ‘uh-oh!’ They forgot to serve it to everyone else!” the text on the TikTok reads. “I know better now. I hate myself!”

Of course, the internet did its thing and shared some very strong thoughts on the matter.

It made a lot of people feel second-hand anger for the bride.

“This made me angry and it’s not my wedding,” commented one person on the TikTok.

Another person reacted to cake gate in their own TikTok.

“If my guest had to ignore my dessert table and help herself to a slice of the top tier of my wedding cake because she thought we ‘forgot to serve it,’ I’d never speak to her again.”

@ashmikamaneyIf you want to get mad with me, the original video is the under this sound.♬ original sound – mediocrehailey

Other people questioned whether it was real or just a stunt.

“This cannot be real omg,” wrote a commenter.

And many wondered why no one tried to stop her.

“I just don’t get how no one came and stopped you 😂” reads a comment.

“As a wedding planner, the way I would have swooped in so fast to stop you 😂😂” an expert chimed in.

While many are furious, others took the accident lightly.

“Honestly if this was my wedding I would be dying laughing 😂” one person commented.

“Can’t believe people would end friendships for a cake” added another.

Luckily for Hailey, the bride forgave her in the comments.

“…as the bride whose cake this is – SHE IS FORMALLY FORGIVEN AND HAS LEARNED HER LESSON IN WEDDING ETIQUETTE” wrote Marie Gregson Martinez.

Thankfully there are far worse stories to come out of a wedding.

For example, a wedding DJ in Vancouver got punched over a song request.

There has even been controversy over a wedding photo shoot that happened during the Queen’s floral tribute.

How would you react if someone did this at your wedding?