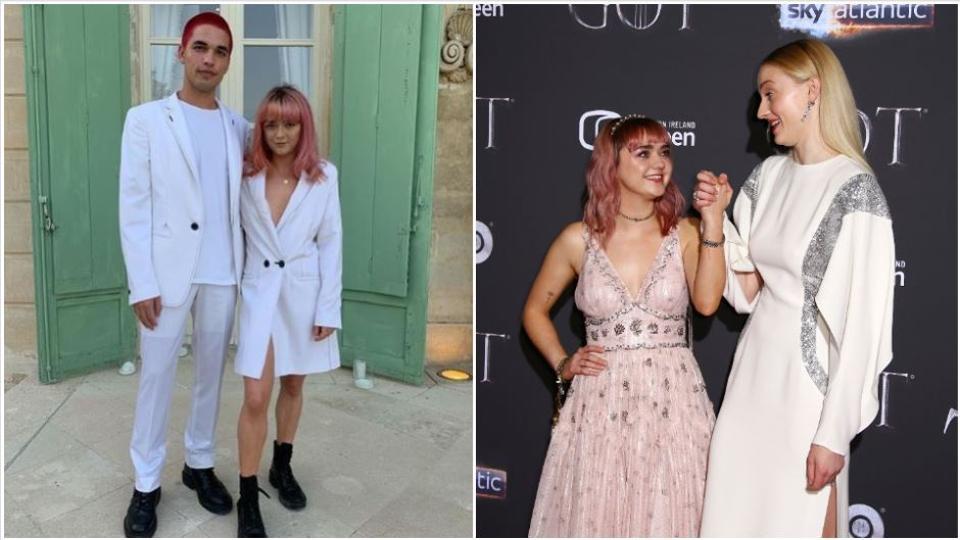 Just a day after Sophie Turner and Joe Jonas got hitched for the second time, Maisie Williams shared a picture from the rehearsal dinner on Friday stating that it was a “white party”. In the picture shared by the 22-year-old actor on Instagram, she is wearing a knee-length white blazer dress, paired with black boots.

The Game of Thrones actor is posing with her boyfriend Reuben Selby, who looked dapper in a white jacket, shirt and white pants, paired with black boots.Williams and Selby had colour-coordinated pink hair. “White party for the bride and groom,” the actor captioned the picture.

Williams and her GoT co-star Turner are long time friends, growing up together in the public eye while playing sisters Sansa and Arya Stark on the hit HBO series.

Not only did the best friends get similar tattoos to mark the day they were cast on the show, but Williams was one of Turner’s two maids of honor for the big day.

The newly-wed recently opened up about her enduring bond with Williams in the July edition of Psychology Magazine, People reported.

“Maisie has been the most wonderful friend to me over the years. We grew up together on Game of Thrones and we have shared so many things and talked about everything,” she shared.

“We both leaned on each other during those times when we felt out of place and a little lost. It’s been so good to have such a great friend like her around and we are still very close,” she concluded.

Turner made the revelation about her unique bond with Williams, recently to Dark Phoenix costar Jessica Chastain in a video from Vogue Paris, People cited.

“My best friend Maisie, she and I have a very intense friendship, a friendship that I haven’t had with any of my other girlfriends before. Maisie is definitely my protector and I’m hers, too. I know if anything happened — especially if it was on Game of Thrones, which it never, ever would — she’d go crazy and protect me. Maisie is my strong home,” she said.

On the other hand, the feeling is mutual for Williams who told Glamor UK that Turner has “really helped” her over the years. “Sophie knows too much about me to not be my friend,” she shared.

“I can’t tell you the number of times Sophie said, ‘Go to therapy,’ before I actually did. She really helped me through some messy breakups and some friend breakups. Whenever I’m like, ‘I need help! This is bigger than anything I can sort out on my own,’ Sophie is my point of call,” she added.

Meanwhile, DJ Diplo, who live-streamed Sophie and Joe’s Vegan wedding on Instagram in May, was rid of his cellphone at the wedding in France.

The 40-year-old DJ joked that the pair, who recently tied the knot for a second time, in France, confiscated his phone in order to keep their wedding a little more private.

Dilpo shared a photo of him in a black suit from the ceremony on his Instagram account and wrote, “This is the only photo I got from Joe and Sophie Turner Jonas wedding because they took my phone from me and put in a holding cell during the . Heard it was lovely tho.”

On May 1, the couple surprised the world when, after their stunning appearance at the Billboard Music Awards, the two got hitched in Las Vegas.

It was all thanks to American DJ Diplo — who broke the news on social media by posting a series of Instagram stories from the private ceremony — that the world got to know about the wedding.

Earlier this month, Diplo said that he only recorded the ceremony because he had no idea that the wedding was the real deal, People reported.

While Jonas and Turner had both said that they found the live stream funny and it’s clear there are no hard feelings, both did express disappointment that their private moment was broadcasted for millions of people.

“It’s tricky to keep secret when people live stream it. It would have been better if no one had known, but I actually think it was funny,” the Game of Thrones actor told Net-a-Porter’s PORTER edit.

Turner continued, “Maybe we wouldn’t have kept it secret forever. I think at some point I would have had to stop saying ‘fiance,’ but yes, I would have kept it a secret. Marriage is a private thing between two people and I think that’s how it should always be. It’s not about the dress, it’s not about the food. It’s about being husband and wife, and being dedicated to each other forever.”

Jonas had joked that Diplo’s video “ruined” the wedding.

“I love Diplo. But he loves his ‘gram more than a 13-year-old. He posts every five seconds. He literally streamed live with dog face filters,” he said on Capital Breakfast with Roman Kemp.