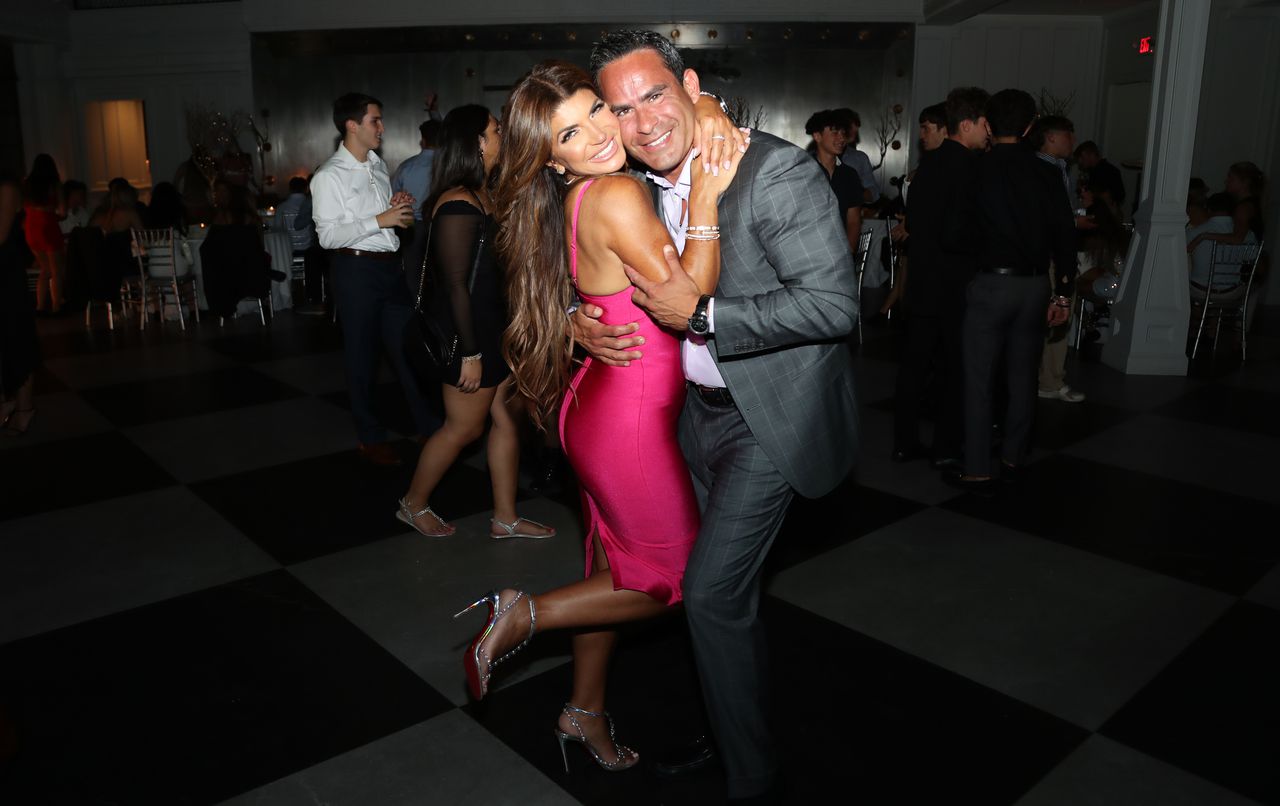 Photos and video shared by Giudice’s daughters, her co-stars from “RHONJ,” fellow Bravo “Housewives” stars from various cities and the RHONJ Obsessed account on Instagram show the reality TV star in her wedding gown at the ceremony and reception, along with other scenes from her happy day.

Giudice, 50, wore her hair piled high atop her head above an oversized glittery tiara (to match the scale of the ‘do), with more hair cascading below.

The wedding dress, which had a nuanced pink tint visible when she was standing next to white (like Ruelas’ suit jacket), had a ruched bodice.

Giudice sported sheer gloves that reached past her elbows. A long veil trailed her on the bridal runway as she carried a large bouquet of white roses, which also adorned the path and ceremony area.

The bride wore a second off-shoulder white wedding gown to the reception featuring lace and a high slit. In one video from the party, she tried her hand at the drums next to the wedding DJ.

Milania shared a TikTok video showing the sisters dancing in their dresses.

Giudice’s “RHONJ” co-stars were also there, like longtime friend Dolores Catania, who grew up with her in Paterson, and Jennifer Aydin of Paramus. They were both bridesmaids, and were joined at the wedding by castmates Jackie Goldschneider and Margaret Josephs (not bridesmaids).

Though invited, Melissa Gorga, another “RHONJ” star who is Giudice’s sister-in-law, was not there, nor was her husband, Giudice’s brother Joe Gorga.

Their absence was apparently precipitated by a late stemming from the events of a recent reunion episode taping for the reality series, Page Six previously reported.

Another video shows Giudice and Ruelas slow dancing for their “first dance” as smoke from a fog machine billowed around them.

“I have to say honestly it was one of the most beautiful weddings I have ever been to,” Zarin glowed in an Instagram post. “The grounds at The Chateau were breath taking but seeing T when she opened the doors of the chapel to walk gracefully down the isle thru the gardens was magical in her soft pink dress that was gathered at the bottom and a very long veil that glided behind her. The food was a 10 including the biggest cowboy steaks! , flowers 10, music 10.”

Amy Kuperinsky may be reached at [email protected].com and followed at @AmyKup on Twitter.