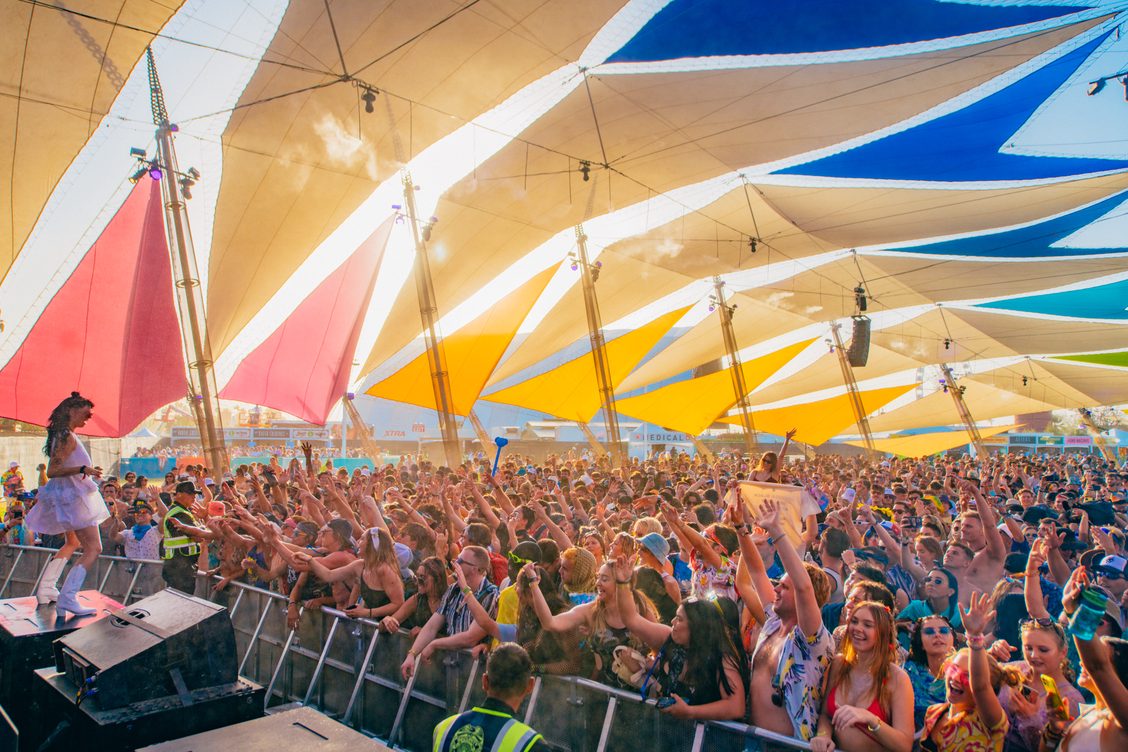 In the years since her breakout as a viral internet sensation, owed to the overnight success of her 2011 single “Friday,” Rebecca Black has transcended her “accidental” rise to fame, sharing self-aware TikToks mocking her debut while redeveloping her artistic vision . In 2021, Black imparted a six-track, hyper-pop-infused EP, Rebecca Black Was Here; the project triumphantly reflected her sonic rebirth and newfound creative autonomy.

Black’s appreciation for modern dance music stems from the emergence of mainstream dubstep in the early 2000’s. Since delving into Skrillex’s groundbreaking catalog in her adolescent years, Black’s taste for electronic dance music expanded to embody its array of subgenres, and in 2018, the pop singer taught herself how to DJ. Black’s reverence for progressive house and trance, among other subgenres, is audible in much of her pop-heavy repertoire. For example, her most recent output, “New Moon” with MØ, is an anthemic dance-pop record with a structure that derives from house music’s four-on-the-floor kick pattern.

Minutes after gracing the Do LaB stage during Coachella’s opening weekend, a mature and articulate Rebecca Black sat down with Dancing Astronaut for an exclusive interview on her new music, newfound appreciation for live mixing, and hard-fought journey to authenticity. Read the on-site Q&A, watch Rebecca Black’s lyric video for her latest single, “New Moon,” and browse her upcoming European tour dates below.

You recently issued your first work of 2022, “New Moon.” What was the writing process like and how was collaborating with MØ?

Rebekah Black: “I was fucking shook when she reached out and asked us to be apart of the remix; MØ was actually one of the first artists I tried to go see at Coachella like seven years ago! It was honestly a very easy process; the song lends itself to such great pop melodies, and I love everything that MØ does.”

How would you say your sound has developed over time?

Rebekah Black: “I feel like it’s just developed for the first time. When I got started, I had no control over what I sounded like or what my debut was going to be; ‘Friday’ was a fucking accident. I’ve just tried to find those beginnings of what felt right to me. Right now, I think my sound lives in a space that some would consider very pop and some would consider very not pop, and I kind of love that about it.”

At one point in your career did you begin to feel your most authentic self?

Rebekah Black: “That answer changes every day. I’m 24, so I still have no idea who I am. At the same time, I’ve been discovering and coming to terms with my sexuality and how I feel about the world. I’m getting a better understanding of how I feel about everything around me each day. Every day I feel like I’m finally getting it, and then I start over the next day.”

What most excites you about playing Coachella?

Rebekah Black: “It’s Coachella! I’ve been going to this festival ever since I was like 15, and I never fucking thought I’d be able to do it. It was so fun to [perform] as a DJ while bringing out my friends. It was so cool to make it a moment not just for myself but for my world.”

When did you learn to DJ?

Rebekah Black: “My friend had a controller back in 2018 while I was dating someone that she lived with. We had a party one night and she was like ‘You’re going to DJ,’ and I didn’t realize you could just learn how to do this! I just thought you were born with skills to DJ; I don’t know, I never thought about it. But I did it and it was so fun, so I wanted to figure it out and be that person who could curate a vibe. It’s been a series of learning over the past few years.”

Where did you first find your appreciation for dance music?

Rebekah Black: “I listen to a lot of different kinds of music. I feel like the first artists I really got into were like Duck Sauce…I have to give credit to my little brother who first introduced me to Skrillex back in like 2008. That’s when I got into dubstep, which opened up my world to house, deep house, trance…I feel like the current streaming algorithms also really got me into it ’cause I’d dive deeper and deeper into these holes of artists I like.”

What do your 2022 tour and release schedules look like at the moment?

Rebekah Black: “I just finished an album, so at some point that will come. I’m going to Europe in May for the first time [on] my tour. And there’s some fun stuff to come [in the United States] this summer, but we haven’t announced any dates yet.”

Who is your dream collaboration?

Rebekah Black: “There are so many, but honestly, I would fucking love to do a song with Pitbull. I’m trying to be Mrs. Worldwide.”