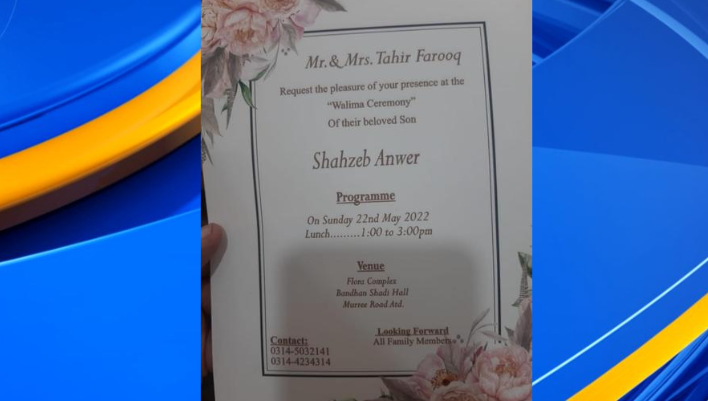 BIRMINGHAM, Ala. (WIAT) – This weekend, Shahzeb Anwer will get married in his home country of Pakistan, and all of Birmingham, Alabama, is invited to attend.

Anwer is no stranger to the Birmingham. Although he was only there for a short time, he said he feels like the city’s “favored son,” and he wants to repay the favor.

The 31-year-old had been diagnosed with hyperparathyroidism, a disease that had been causing him to get kidney stones once or twice a year since he was 18. He began having digestive problems and developed skin issues. But the treatment for his medical issue, Anwer found out what a surgery that wasn’t available in Pakistan.

So Anwer began looking for help outside his own country. He looked into traveling to Turkey, Singapore, the UK, and India for treatment, but pandemic-related travel restrictions had made things difficult. Anwer was also worried about costs – the cost of travel as well as the out-of-pocket cost of the medical procedure itself.

How guests can honor their budgets in peak wedding season

Eventually, Anwer found out that having the procedure done at UAB hospital in Birmingham would cost him about half of what had been quoted to him by other medical facilities. So he started learning more about Alabama, a state he’d never even heard of before. In his search for information, Anwer had posted on various websites, including Facebook and Reddit, asking for folks to help him better understand the culture he was about to be immersed in, if only for a short time.

His first post in Birmingham’s subreddit was about clothes. He wanted to know what clothes he should wear in the US Could he wear what he already had in his wardrobe? Would he need to get something new to fit in?

The response he received was overwhelming, he said.

“People responded in a way that I wouldn’t even expect from my own people in Pakistan,” he said.

Redditors in Alabama began helping Anwer, facilitating his trip, giving him tips, and cheering him on along the way. Andrew Harris was one of the people who reached out. He said he wanted to help dispel any negative stereotypes Anwer may have had about Alabama and the South.

“Anytime anyone comes here, I really, truly want to make them have the best time,” he said.

When Anwer made his way to Birmingham, Harris helped him with transportation, bringing him to the store, to eat out, or to medical appointments.

MAP: How much do weddings cost in your state?

“He would always try to pay me,” Harris said. “But I didn’t want his money. I’ve gained such a friend – a best friend for life.”

During his time in Birmingham – his first time out of Pakistan at all – Anwer came to love the city. He visited local Indian and Thai restaurants, as well as getting in as many trips to McDonald’s, KFC, and Five Guys as he could. He walked through Highland Park and the trails of Mountain Brook. He said Birmingham became his home away from home – a place he’ll never forget.

Anwer’s surgery was successful, resolving the medical problems that had plagued him for years. But after UAB had done its job, it was time for Anwer to head back home to Pakistan. Andrew Harris wasn’t ready for him to go.

“When he started to leave, I got this huge hole in my stomach – in my heart – that I was about to lose him,” Harris said. “Knowing him such a short time, I was surprised that I started having those feeling, but he’s already become such an important part of my life.”

Anwer headed back to Pakistan, but he wasn’t done with Birmingham. When he found out he’d soon be getting married, he posted an invitation in the Reddit group that had helped him find his footing in the United States. Everybody in Birmingham was invited to the wedding, he said.

He’s unsure whether anyone from the city will be able to make it – there was short notice and round trip tickets to Pakistan cost thousands, but he said he felt like he owed the city an invitation, whether its residents can take it up or not.

“Birmingham treated me as their favored son,” he said. “Birmingham literally gave me the attention that people give out to celebrities… So that’s why I did it. I believe someone should be coming, because Birmingham has now become a part of my life.”

Anwer’s wedding is taking place Sunday, May 22, in Pakistan.