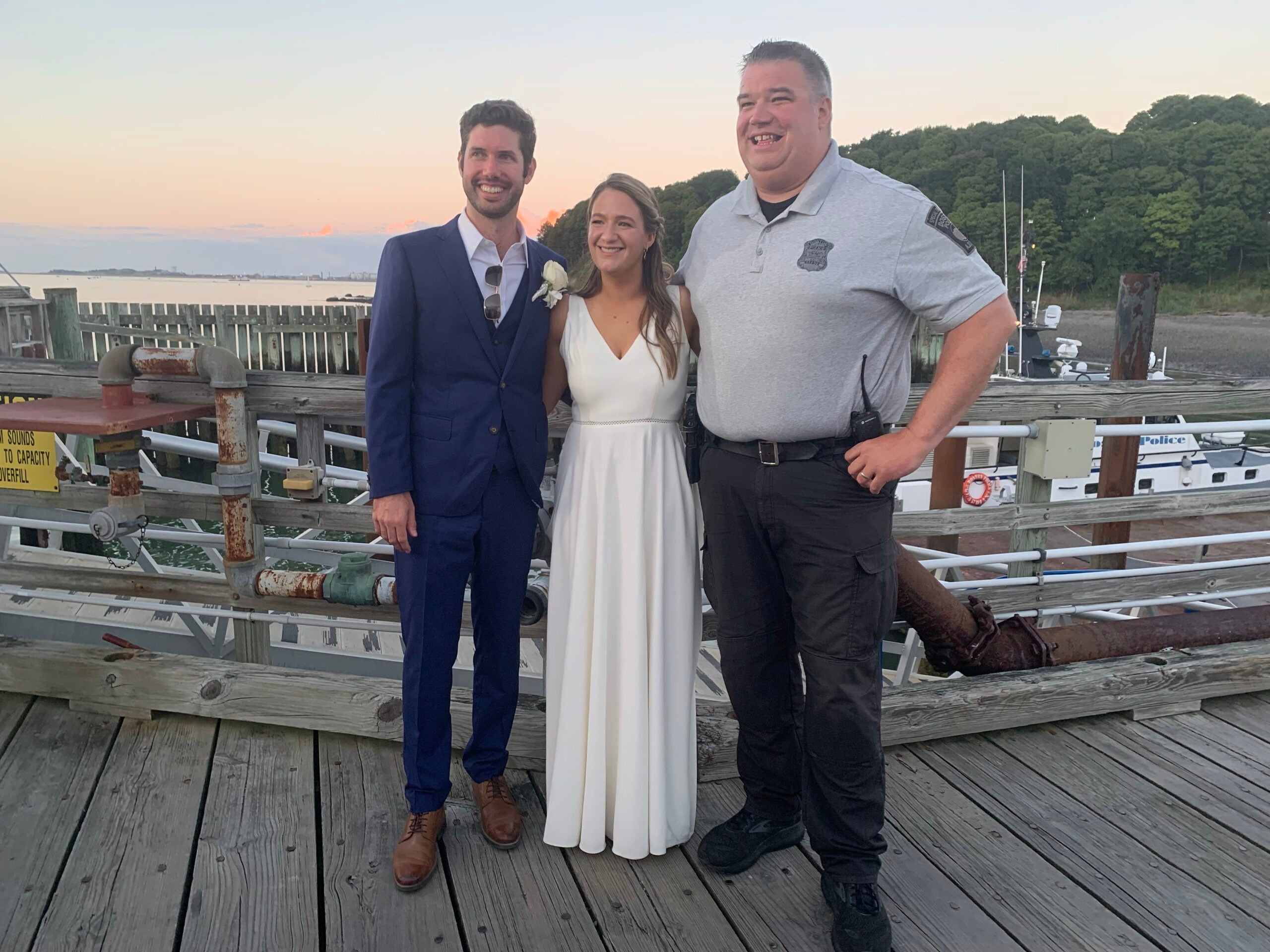 The officer said it was the first time he’s ever gotten a call for a “groom in distress.”

From left: Patrick Mahoney, Hannah (Crawford) Mahoney, and Boston Police officer Joseph Matthews smile for a photo on the dock at Thompson Island where the Mahoneys were married on Saturday, Aug. 13, 2022. Matthews took Patrick and his groomsmen to the island by boat after their vessel had a mechanical issue. Nick Stoico/Boston Globe

Patrick and Hannah (Crawford) Mahoney were set to be married at the Thompson Island Outward Bound Education Center on Saturday when suddenly Patrick, his groomsmen, and the wedding’s DJ and florist became stranded on the mainland, The Boston Globe reported.

A mechanical issue with the boat which was supposed to take them to the island left the group of 13 with seemingly no way to reach the island in time for the 3 pm wedding, the Globe reported.

Patrick told the Globe he was afraid the ceremony would be delayed by hours if they couldn’t find transportation soon.

Hannah, who works in the advertising department at the Globe, was already on the island with her bridesmaids. Patrick told the newspaper he didn’t want to worry his bride by telling her what was happening, but she said she began to sense that something was wrong early in the afternoon.

“Everyone just stopped communicating with us,” she said. “We didn’t hear anything by 1 o’clock, so I was like, ‘maybe a vendor’s late or something going on.’ And then it’s 1:15 and I’m like, ‘OK, maybe there’s something really wrong.’

It was Officer Joseph Matthews, who has 12 years on the force under his belt, who responded. He told the Globe this was the first time he’d answered a call for “a groom in distress.”

Matthews took the group on a department vessel to Thompson Island, getting them there 17 minutes later than they had planned, but early enough to prevent the wedding from being delayed, the Globe reported.

“It was good to get a nice call for a change and help people out,” Matthews said. “They seemed happy, and we were happy we could do it. It all worked out.”

The rest of the day went as planned for the Quincy couple, the Globe reported.

“The ceremony started on time, which is rare for any wedding in any circumstances, but especially today,” Mary Kate Knight, the wedding planner, told the Globe. “…We would still be without them if it hadn’t been for [BPD].”

As they were traveling to the island, Patrick and his groomsmen thought about pranking Hannah and her bridesmaids by sending her a photo of Patrick being handcuffed by an officer, the Globe reported. Ultimately, they decided against it.

Stay up to date on all the latest news from Boston.com

Stay up to date on all the latest news from Boston.com