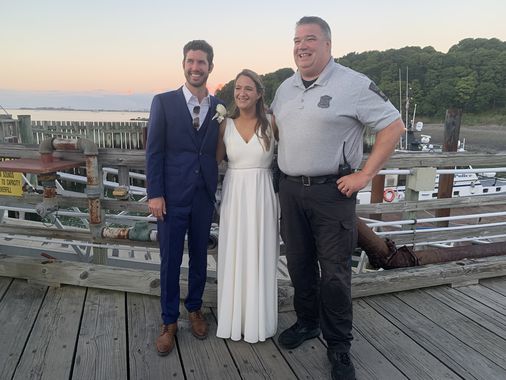 With no time to wait for a water taxi, Denise Holden, director of event sales for Thompson Island, contacted BPD’s shore unit and asked if they could help.

That’s where Matthews stepped in, taking Patrick Mahoney and 13 others on board a police department vessel and racing them across Dorchester Bay to Thompson Island, where they arrived 17 minutes later than expected but did not delay the 3 pm ceremony.

Matthews said he was glad he could help the couple on their special day.

“It feels good,” said Matthews, who joined the department in 2005. “My wedding day was the best day of my life. … They were just very appreciative [and] nice kids, very happy to be married here.”

Patrick and Hannah Mahoney met while they were students at the University of Arkansas and now live in Quincy. Many of their guests had traveled from out of town for the wedding.

Patrick said he was starting to feel nervous as he waited on the dock at Raymond L. Flynn Black Falcon Cruise Terminal, worried that the ceremony would be delayed for at least several hours if they couldn’t find transportation soon. Those nerves lifted when he learned BPD had offered their services.

“They were there very quickly to get my groomsmen and all of our vendors out here to the island and kind of save the day,” Patrick Mahoney said, speaking to reporters on the island hours after saying “I do.”

Hannah Mahoney, who works in the advertising department at the Globe, was already on the island with her bridesmaids, but she said she didn’t know there was a problem until after it had been solved.

“Everyone just stopped communicating with us,” Hannah Mahoney said. “We didn’t hear anything by 1 o’clock, so I was like, ‘maybe a vendor’s late or something going on.’ And then it’s 1:15 and I’m like, ‘OK, maybe there’s something really wrong.’ And then finally they just appeared out of the dust. I think they were waiting to tell me in person.”

Indeed, Patrick Mahoney said he did not want to worry his bride.

“It was a personal choice not to bother her with any problems,” he said with a laugh.

As they were being brought to the island, there was a moment when Patrick and his groomsmen considered playing a prank on Hannah and her bridesmaids. They took a picture of Patrick being put in handcuffs by an officer, but they ultimately decided not to send the picture to Hannah or her friends.

The rest of the day went on just as they planned.

“The ceremony started on time, which is rare for any wedding in any circumstances, but especially today,” said Mary Kate Knight, an event sales manager for Thompson Island who was in charge of planning the wedding. “It was incredible. … We would still be without them if it hadn’t been for [BPD].”

As their guests celebrated in the evening, the newlyweds walked down to the dock with their photographer and posed for pictures with the city skyline behind them. A red and orange glow glistened across the bay as the sun went down.

The couple wanted a picture with Matthews as well, to remember the police officer who helped ensure their wedding day would not be ruined.

“We would have just been a bunch of girls sitting on the island and waiting around,” Hannah Mahoney said. “I’m very thankful and really appreciate what they did.”

“It was good to get a nice call for a change and help people out,” Matthews said. “They seemed happy, and we were happy we could do it. It all worked out.”