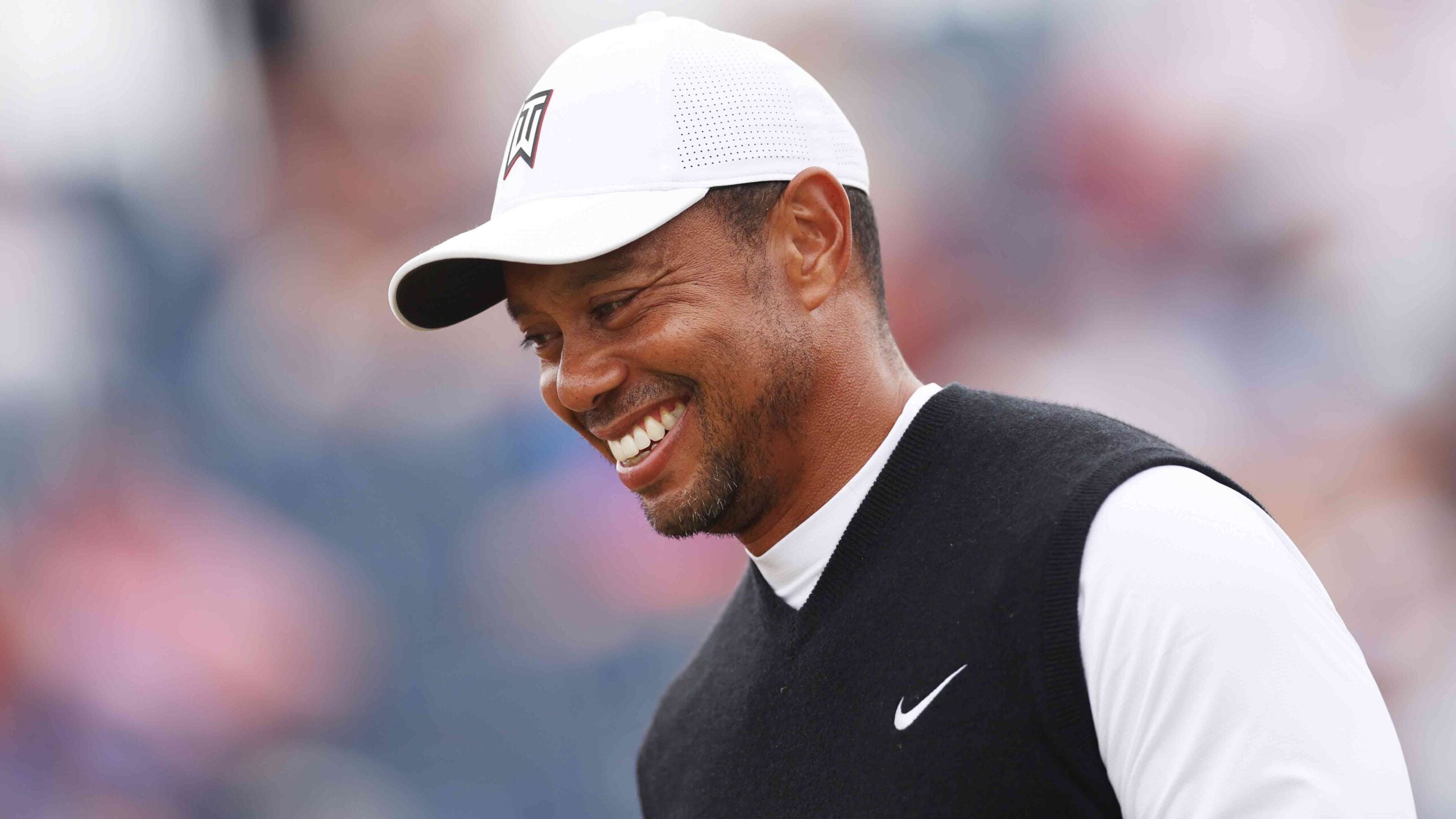 Tiger Woods at St Andrews ahead of The Open

Hello friends and happy Open week! If you’re like me, your sleep schedule is about to get all messed up in the best way possible. It’s for the sake of great golf, though, so I’m not complaining.

The last week has been a whirlwind of golf fun for me. My best pal made an ace at Wannamoisett Country Club (which I got to celebrate!), I headed to the American Century Championship in Tahoe and then spent the weekend in San Francisco with some college friends who showed me around the par-3 course at The Olympic Club (which is nothing short of amazing).

Between last week’s ACC and the Icons Series the week before, I’ve spent a ton of time watching celebrity golf and not so much of it watching the pro game. It’s been a blast, but I’ve missed my first love: Tour life. Luckily, that’s what this column is for. Here’s what we’ve missed!

Honestly, Jessica Hadwin deserves a permanent spot in this write-up. I want to declare the Hadwins the most hilarious golf couple out there, but I’m not sure it’s a 50-50 split. It might just be that Jessica is hilarious and Adam is along for the ride. (Adam, if you’re reading this, I believe in you! I just need to be absolutely sure that you’re funny before you join Jessica at the top of my list.) Anyway, Jessica absolutely roasted her husband on social media over the weekend and I am here for it.

Thank you for getting the dishwasher reorganized. Now could you get the laundry done too while I’m busy at work providing for our family? 👍

It’s important to note that Jessica is a Nurse Practitioner, so she’s not wrong. The lesson here is that if you’re going to mess with Jess online, she’s going to give it right back. Max Homa would be proud.

I’ve been uninvited to a few things in my day — ice cream with siblings after an argument and a college formal after my date found a better option, to name a few — but neither of those measure up to the “actually, you can ‘t come” treatment Greg Norman received publicly on Saturday.

Norman potentially taking away from the heritage of the Open? how?

Totally kidding. I’m curious to know how he reacted to this, though. I can tell you firsthand that getting uninvited doesn’t feel great. Now that I think of it, though, it’s kinda an honor to get uninvited from anything major-related, because it means you were once on the invite list at all.

To know me is to know that I am a bad traveler. I mess up scheduling flights, I can never navigate airports and it always takes me about 40 extra minutes to find the rental car center. And I don’t enjoy flights. I get simultaneously nervous and extremely bored. Sitting still for six hours? No thank you. I did, however, come across a flight that I think even I would enjoy.

With space like that, I would never have to pay for an extra leg room again. This looks like the best slope in town, or should I say at 35,000 feet. The music going, Perez dancing, Brooks Koepka and Paulina Gretzky deep in conversation. Oh, what I’d give to be a fly on the wall on that plane.

While we’re on the topic of LIV, I’d like to share the following photo that I can’t quite figure out.

We’ve got Pat Perez, Paulina Gretzky, Trevor Gretzky and Dustin Johnson. Between the backdrop, the poses, the outfits and the props, I am not sure what is happening on earth, but it has definitely sparked my interest. Were they being paid for this? I can’t imagine any other world in which DJ and Perez would be up for this photo-op. Then again, it all could’ve been in the name of good fun. Only they can say.

And finally, we have LIV’s water bottle of choice. I grew up on lukewarm tap water, so anything above that feels extravagant. Dasani? Nestlé Pure Life? Sign me up! But Fiji is a whole different ball game. When I think of Fiji water, I think of Bill Gates. I think of the finest country clubs in the world and I think of Queen Elizabeth. Fiji water is not just for anyone.

Players signing for millions was one thing, but the fact that LIV Golf serves Fiji water is what really convinced me that there’s a lot of money behind it pic.twitter.com/eDVMzjSx19

But guess what, folks? It is for the LIV players, and that right there is how I know that this tour means business. To invest in something like Fiji water means you are 100% positive you’re going to succeed, or that you have already succeeded because why else would someone ever spend $300 (okay, maybe not that much, but a lot) on a simple bottle of water when you could put the cash toward literally anything else?

Ok friends. I have a few updates on Jon Rahm that don’t include his profanity-laced reaction on Friday, and the first surrounds the Rolex he bought for his caddy.

While Rahm’s caddy’s watch isn’t new, it’s news to the rest of us. An engraved Rolex? Not a bad gift! For my 25th birthday, I got a book and what I thought was a chocolate bar, but it turns out my dad ate a chocolate bar on the way home and didn’t realize he put the wrapper in my gift bag.

Anyway, back to Rahm. It looks like whatever house Rahm is renting for The Open this week is full of condiments but lacking a dryer. Hopefully his shirts air dry before he has to wear them on the course. Damp shirts and windy Scottish weather sound like they don’t mix well.

There’s nothing I love more (sorry, family and friends) than a PGA Tour wedding. DJ and Paulina, Brooks and Jena, you name it. Tom Watson got hitched to Leslie Anne Wade over the weekend, and while we weren’t treated to videos of Kid Rock or Ludacris performing like we were at previous golf weddings, we did get this lovely picture. Congratulations to the happy couple!

So, Watson was in St Andrews on Monday, which sounds like a lovely way to celebrate.

I have a theory that Eldrick Tont Woods is his happiest, most authentic self when in the United Kingdom. I will present my evidence below.

First, we have Woods arriving at Adare Manor for the highly exclusive JP McManus Pro-Am.

The shades. The coffee. The backwards hat! He seems calm, cool and collected. And better yet, he’s joking around with someone in the distance.

That’s Exhibit A. On to my next piece of evidence, which is Tiger owning Justin Thomas by the putting green at St Andrews.

“See you tomorrow for the past winners event. Oh, no. I forgot you’ve never won here.” savages It must be nice to be Tiger Woods because you can make jokes like that and have the talent to back them up.

And then there’s this video of Tiger messing with Rory on the putting green at St Andrews. What I appreciate about Woods’ jokes is that they aren’t loud. He’s quick and witty with his actions, and definitely catches McIlroy by surprise.

Next up we have Tiger stepping on Jack Nicklaus’ foot on the Swilcan Bridge, which isn’t particularly funny, but definitely notable. I know, I know — it probably wasn’t on purpose. If it were, though, I like to picture Tiger whispering something to Jack about how he’s gonna get one major closer to his major record this week and getting his point across via his FootJoy spikes.

And finally, we have Tiger messing around with Lee Trevino.

I’m telling you, this man is in his absolute element this week. He’s more comfortable at St Andrews than most of us are in our own living rooms.

And finally, although not a joke, I thoroughly enjoyed this image of Tiger in the wild, in the Mysteries and Thrillers section of a book store, no less!

I did my best to find which books he picked up, but couldn’t quite find an answer.

Thanks to a few of my Twitter followers who are clearly much more avid readers than I am, I later learned he picked up “Strangers” by Dean Koontz. Enjoy the book, tiger.

2021 Open Champion Collin Morikawa had to give back the Claret Jug on Monday. And according to him, “it sucked.” Fair Enough!

He was given a replica of the trophy, but I’m willing to guess it just doesn’t feel the same. I hate returning my sister’s clothes once I’ve borrowed them, so I can totally relate to how Morikawa must’ve felt here.

General updates from across the pond

And now for some general, miscellaneous content from the United Kingdom. First up, Brooks Koepka and Jena Sims rang in their one-month marriage anniversary in Ireland.

Next up we have Scottie Scheffler and Sam Burns, who despite looking chilly, appear to be living their best lives across the pond. Make sure to scroll over to the below Instagram post for some WAG content as well.

So, Scottie Scheffler just chilling at the beach is an aspirational vibe.

Scottie goes for a swim

And finally, we have Mr. Max Homa who is so deeply committed to the game that he went out for another 18 holes after making the cut at the Scottish Open. Talk about a love for the game!

Alright folks. That’s all I’ve got for this week. Here’s to an awesome week of The Open, and more importantly, some great content from The Open.