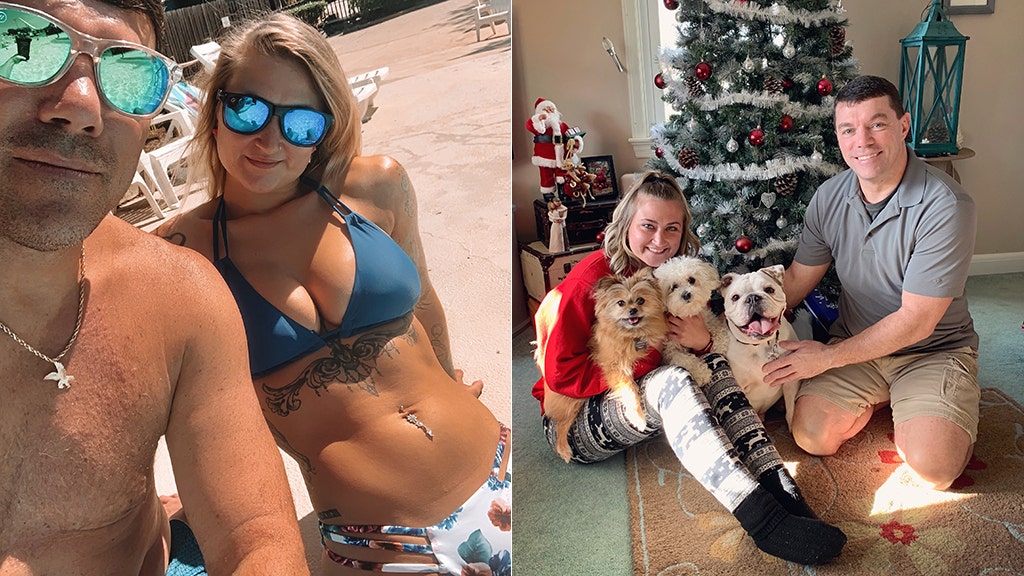 Love knows no age for one happy couple, who both divorced their spouses to relocate to North Carolina and pursue a relationship after connecting at the woman’s wedding, at which her now-boyfriend worked as the DJ.

Despite a 23-year age gap, the couple say they’ve found true love, and hope to have a family together one day.

Megan Willis, 26, first met Mark Stone, 49, through her sister in November 2015, while planning her wedding to her now ex-husband, the Daily Mirror reports. Willis later booked Stone to serve as the DJ at her July 2016 nuptials, and knew he’d be a perfect hire given his experience playing at The Crazy Tuna Bar & Grill in Maryland, near Willis’ hometown of Baltimore.

“My sister went to this bar a lot and when I came home to visit from Saratoga Springs, New York, she took me to the Crazy Tuna. She introduced me to DJ Mark Stone and his brother who was part owner of the Crazy Tuna, ” Willis said.

Despite a 23-year age gap, the couple say they’ve found true love, and hope to have a family together one day.
(MDW features)

WOMAN TRIES TO BURN LETTERS FROM HER EX, IGNITES APARTMENT INSTEAD: REPORT

“Every time I came home to visit we would go to the Crazy Tuna and most of the time Mark was there. He was such a people person, so much fun and we loved to goof off with him.”

One year after she said “I do,” the woman found herself feeling lonely in her marriage, and would travel home to visit her family – and the Crazy Tuna.

“About a year later I’m home visiting and we go to the Crazy Tuna, Mark is there and we talk about my marriage and how I’m not happy in it,” Willis said. “After that night that conversation continued because Mark was having some similar issues in his marriage of 27 years.So we started chatting daily.”

Willis said that her marriage ended because her former ex-husband made her feel “non-existent,” preferring to watch TV and play video games with his headphones on while his wife wanted to “go out and explore” the world.

“Mark was just a friend yet everyday he took time to check in on me. We both really enjoyed our chats no matter how silly or serious they were,” she continued.

Through the difficulty of her divorce, Willis said that Stone proved to be a strong shoulder to lean on, and she soon felt their friendship was blossoming into something more.

“I think I realized I’d fallen for him first. Though it was while Mark was still married but separated from his wife it wasn’t something I felt I could act on,” she said. “I kept it to myself. At this time he needed the support like he gave me and I made sure I was there for him in that way.”

Facing challenges in his own marriage, Stone felt things couldn’t go on as they had been.

After Willis’ divorce was finalized in January 2018, she opted for a change of scenery and moved to North Carolina, the Mirror reports. Eight months later, Stone’s divorce was also finalized, and he moved to the Tar Heel State to join her.

Stone said that though it was heartbreaking to accept the end of the longtime union, he knew what he’d found with Willis was special, and instinctively pursued it.

“I was in a bad place when my ex left me because I didn’t want it and it took me a while to realize it was over. Getting over my ex was the biggest issue,” he said. “It took a lot out of me mentally to accept the end of a 30-year relationship.”

“As I got to know [Willis,] I discovered underneath a person who filled your heart and soul with everything that defines love,” he added.

Stone said that though it was heartbreaking to accept the end of the longtime union, he knew what he’d found with Willis was special, and instinctively pursued it.
(MDW features)

Moving forward with his new flame, however, came with its own set of obstacles. Stone said that some of his family members questioned the relationship at first, especially the 23-year age gap.

“For me, my siblings, and even my kids had reservations about me even getting into a new relationship, much less the age gap, but when they saw me finding happiness again, they all concurred that as long as I was happy, nothing else mattered,” he said.

Though the couple claims that they’ve overheard strangers talking about them – and their evident age gap – while they’re out together in public, they are proud to be together and wouldn’t have it any other way.

“We really don’t care what other people think. We’re happy and our relationship works and that’s all that matters to us,” Willis said.

“Most people whisper something like, ‘do you think she’s with him?’ When we hear stuff like that we just kiss or do something that makes sure it’s obvious to let them know and then we laugh about it. We don’t care what anyone thinks anymore.”

Down the line, Willis and Stone hope to start a family together, and have even chosen names for their future offspring.

In a larger sense, the couple hopes to help shatter the stigma surrounding couples with significant age gaps, such as through their advocacy on their shared Instagram profile page @WeAreMarkAndMegan, Metro reports.

“I hope people see our age gap and the love that we have for each other and for an age gap relationship to be less ‘odd’ and to remove the stigma that if a female is with an older male that she’s with him for money, ” Willis said, according to the Mirror.

After finally finding a true happily-ever-after, Willis said that she and her beau have nothing to apologize for – and neither should other couples who have found happy, healthy relationships.

“Love is love. Never feel ashamed for who you love. Never hide your love. Embrace it, shout it from the rooftops because it’s the most amazing feeling to love and be loved,” Willis mused.

Janine Puhak is an editor for Fox News Lifestyle.