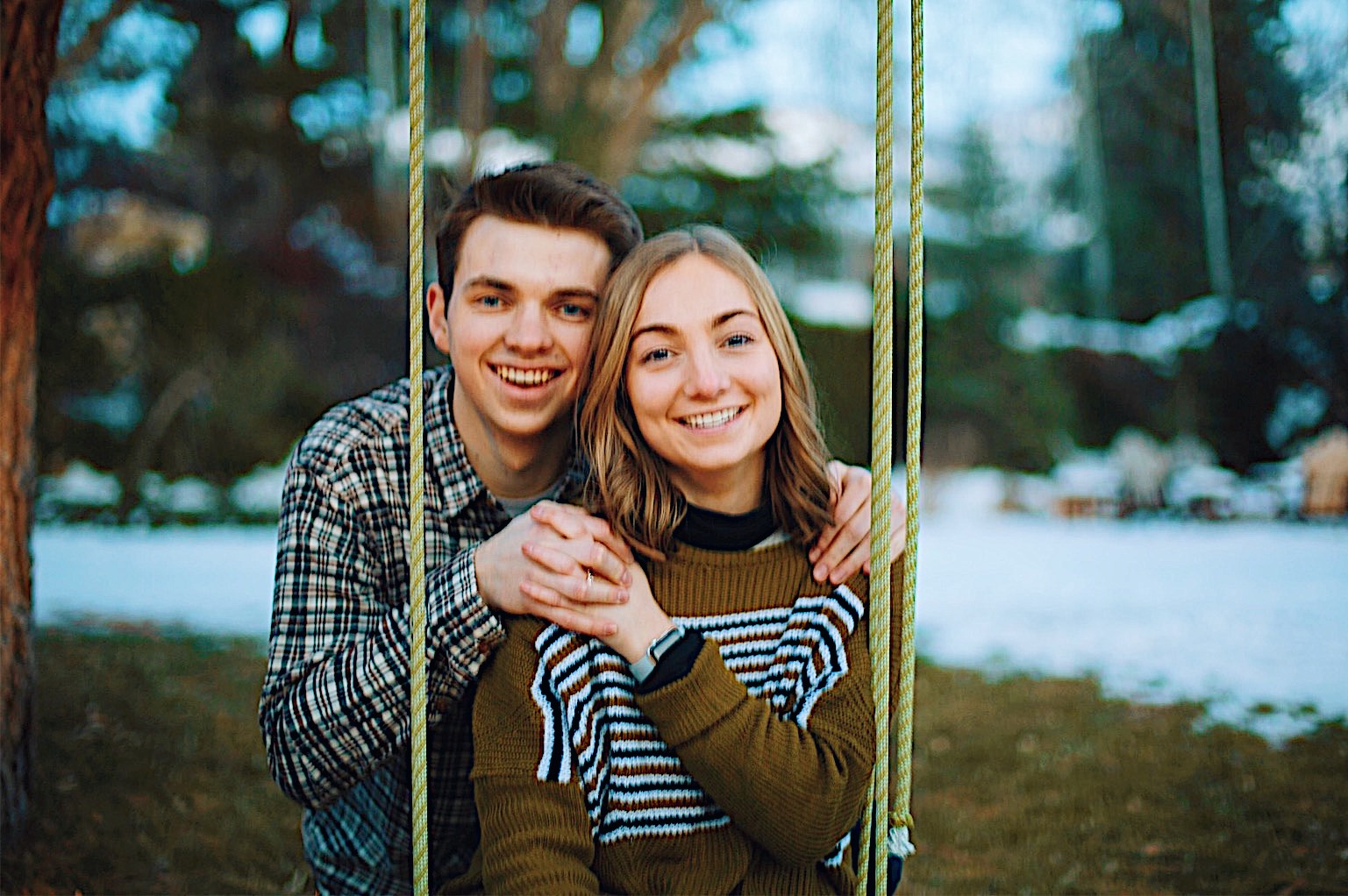 Let me preface this column by saying that I’m not married, nor have I ever been. I’m hoping that will change at some point, but not anytime too soon (a returned missionary NOT on a manic wife hunt from the moment he takes the tag off? Crazy!).

The things I’m about to write are not directed toward anyone in particular and are all meant in good fun as an out-of-touch single white guy making some basic observations. Please don’t come cancel me on social media thinking I tore your dream wedding apart. You did that to yourself, honey.

While the random snow flurries from last week may have suggested otherwise, the summer wedding season is upon us here in Happy Valley. Soon the warm nights will be filled with love, dancing, free food, jealous bridesmaids, groomsmen with bad haircuts, anxious parents of 18-year-old brides and wedding DJs who somehow make a living despite being a wedding DJ. How did the iPod not put those dudes out of business?

As Church members, we believe marriage to be a sacred commitment which lasts for all eternity. The wedding day symbolizes the start of that commitment, but unfortunately the age of social media has turned weddings into a trendy, convenient excuse for shameless self-indulgence.

My roommate is getting married this summer. I don’t really see him that much anymore, because apparently getting engaged just means becoming more active on social media and less active in real life. Who knew? Anyway, the other day he was home and I casually asked how the wedding planning was going, and he just started crying. I’m no therapist, but that might be some wedding-induced emotional damage. It’s brutal out here.

As my roommate sobbed, I began pondering the pattern I’ve noticed with weddings in Utah. There is far too much inconvenience, annoyance and absurdity that comes with tying the knot. Planning a wedding is a nightmare, paying for a wedding is a sucker punch and having to see all of these wedding posts on social media is mind-numbing.

It all starts with the proposal. Obviously, most couples have already talked and determined that marriage is imminent before officially popping the question, but doesn’t that defeat the entire purpose of a formal proposal? I’ve known people who have had temple sealing rooms, reception venues and honeymoon tickets already booked before the guy got down on one knee. Some couples even go ring shopping before the proposal, so why even bother with such a silly formality?

Well, I may call it a “silly formality,” but most other people call it an “Instagram opportunity.” Why else would you propose at the top of a mountain at sunset with a photographer tagging along?

There’s always some sort of shrine-looking setup at the proposal site which usually consists of candles, rose petals, framed pictures of the couple or some other tacky details. Fellas, don’t act like you assembled that thing yourself. Men can barely assemble furniture correctly, and most of our moms earned our Eagle Scouts for us. Please just admit you had outside help in designing and constructing your idolatrous proposal shrine.

You would think the proposal would be the end of the photos until the wedding, but the fun has only just begun. The engagement photos come next, where the girl has her chance to flex how many different outfits she owns while the guy just wears whatever she picked out for him. He’ll have to get used to that over the course of their marriage.

I’ve never seen a set of engagement photos that didn’t look the exact same as everyone else’s, which makes sense since every couple goes to either Sundance, Utah Lake, Provo Canyon or the Salt Flats for their glamor shots. Some couples take multiple sets of engagement photos, which I’m sure the guy is just thrilled about. It’s really a no-win situation for him — he loses half his Saturday getting dragged around, posing awkwardly and then having everyone who sees the pictures realize that his fiancee is way out of his league. But hey, at least he was an AP!

The engagement photos — however many sets the girl demands — end up on the printed wedding invitations that get mailed out as possibly the last non-junk mail content our Postal Service delivers each day in this world of email. Seriously, why not just post a big invite on Facebook or something? Some people hang wedding announcements up on their fridge, and I can’t tell if they’re trying to scare themselves into getting married every time they go to the fridge for food or if it’s more of a warning for the harsh marriage reality of endless photo shoots.

Are we done with photos yet? Absolutely not! Next come the bridals and “first-look” shots, treating the wedding as if it were a new summer blockbuster needing constant sneak previews and teasing beforehand. Not even the new “Top Gun” movie got as much advance promotion as some of these Utah weddings. I’ve never seen a first-look post and felt more stoked to attend a wedding. Couples should really start advertising what food they’ll have at the reception, what songs will get played at the dance party or, if they really want to help everyone out, which bridesmaids or groomsmen are single. You’ll get way more people at your wedding by plugging an attractive bridesmaid than showing us the wedding dress that we’ll end up seeing a thousand times anyway.

By this point the photographer is a rich man or woman, thanks to this process I refer to as “fraud.” As long as we’re on the subject, why are there so many photographers and videographers in Utah? People here really believe that owning a camera is some sort of personality trait. Driving out into a field of flowers, taking pictures of your roommate wearing an oversized fedora and slapping a really oversaturated VSCO filter on it doesn’t take any real skill (admit it, you totally imagined the photo I just described because EVERY Utah girl has one exactly like it on their Instagram). I hate to break it to all you artsy wannabe photographers, but you’re not as cute, fun and quirky as you think you are. To quote “The Incredibles,” “If everyone is special, no one is,” which in this case translates to, “If everyone has a camera, no one cares.”

If you thought the photos were pricey, just wait until you hear how expensive a wedding dress is. The average bride in Utah spends roughly $1,200 on her dress, which will be worn more times for photos than for actually getting married and will just sit in the closet afterward forever. Interestingly enough, Utah is ranked 48th in the nation in average wedding dress spending, which I can only assume is because enough girls here are getting crafty and making their own dresses. There might be some substance to that theory considering how many brides I’ve seen who resembled pioneers or Deb at prom in “Napoleon Dynamite.”

At last we arrive at the wedding day, which usually begins with the bride posting one of the previous engagement, bridal or first-look pictures with a caption reading, “Hey Chad, wanna get married today?” After this many photos, “Chad” is definitely questioning if he really does want to get married that day. Thankfully, the photographer will only insist on taking 800 million more pictures before and after the ceremony, so the end is near.

Sometimes the photographer is joined at the wedding by a videographer, because apparently weddings actually CAN get more pretentious. If you don’t have a video of your wedding including a temple drone shot, a bunch of fake crying and unnecessary slow-motion, then did you even get married? These videographers are some smart businessmen for charging how much they do for a video that, once again, looks the exact same as every other wedding video and will only be watched for a good six seconds before getting scrolled past.

Who even needs a video when you’ve already taken so many pictures? How could there possibly be anything left to document at this point? Do couples even watch their wedding videos again afterwards? Why rewatch your wedding when you could watch literally any other movie, like “Sky High?” Will I ever stop asking so many questions?

I hope and pray nobody’s marriage ever gets so boring that they are forced to watch their wedding video over again. After those frugal and financially overwhelming first few years of marriage — which could have been made easier if our bride and groom had waited to be a bit older than 18 and 20, respectively or even just declare a major before getting hitched — I’m sure rewatching the wedding video would trigger some pent-up rage about the astronomical sum they paid the videographer, who has probably already skipped town on his way to con even more unsuspecting lovebirds.

Finally, the wedding is over and the knot has been tied. There’s a brief period of peace and calm, only for the newlyweds to begin flooding your feed with every single still image captured at the wedding once the photographer sends back all the pictures. Considering how much he or she was paid, you would think the photographer might be a bit more prompt in finishing the photos after the wedding, especially when the period between wedding and finished photos is longer than the duration from first date to marriage for the couple .

Look, I’ll admit that weddings are usually pretty fun to attend. It’s always a bit amusing to attend a seemingly flawless, picture-perfect reception for Dallen and Skyyleigh from Alpine, who met on Mutual and had their first date at Squaw Peak.

My point is, weddings don’t have to be as big a deal as we make them out to be. Marriage is important and eternal, but a wedding is just a day. It doesn’t need to cause all this stress, cost more than four years of college tuition or look like a real-life Pinterest board. I guarantee that no matter whether you have your reception in a five-star hotel, on a breathtaking mountainside or in a stake center gymnasium with carpeted walls, the groom will not care (although he might be most excited about the stake center gym, seeing as that presents the greatest likelihood of a surprise pick-up basketball game).

This may sound harsh, but maybe if we were putting as much effort toward the actual marriage as we do toward the wedding, the divorce rate among young couples in Utah would be lower.

Let’s not become so obsessed with having a perfect wedding which looks better than everyone else’s that we forget what the wedding represents and what it should be followed by: love, service and devotion in marriage.

And if your wedding is immediately followed by a honeymoon to Disneyland, shame on you.