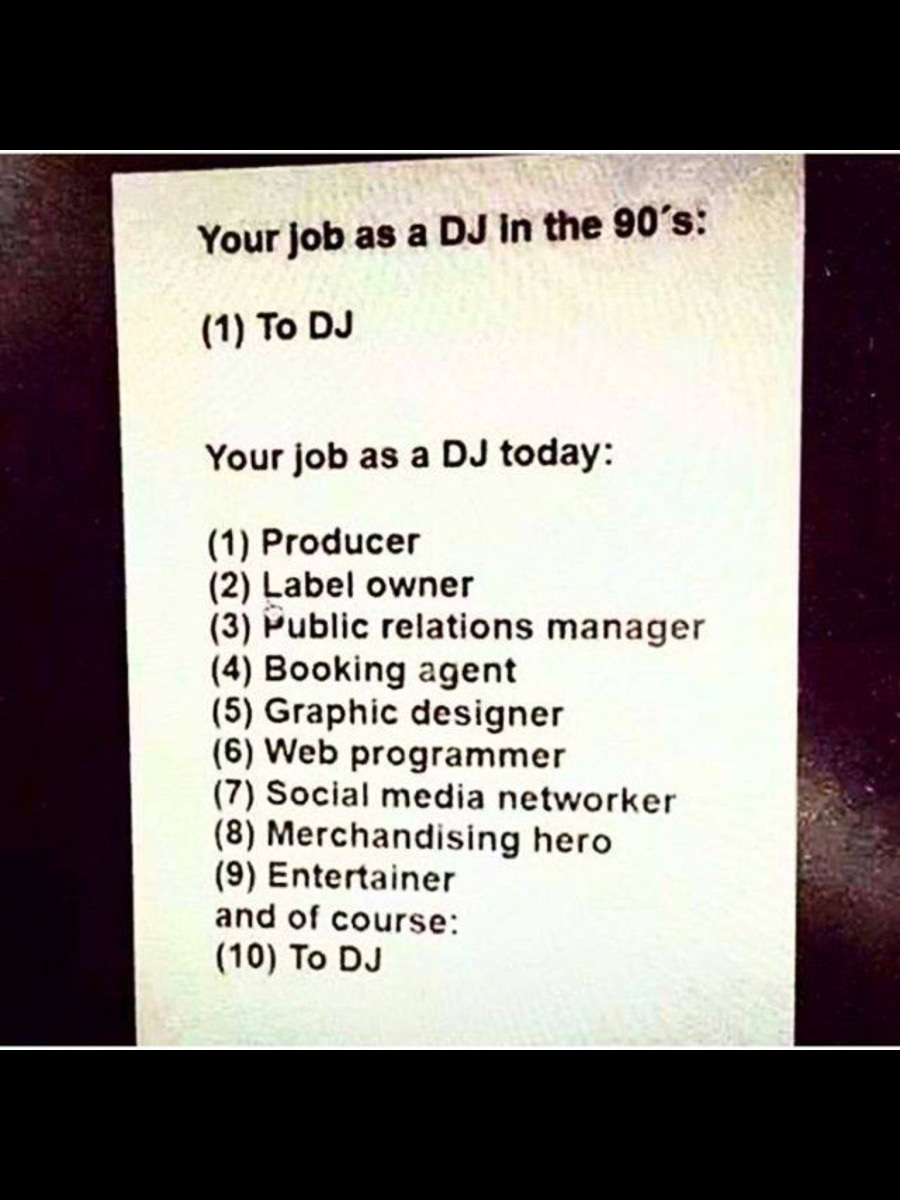 The many hats of the hustle and bustle

Ahhhh the beginnings of EDM, before “EDM”, before laptop DJs, before Live Nation and SFX. Back then it was a bit rougher and also a bit easier, everyone and everything had a function that was pretty clear.

DJs didn’t make $ 20 million a year playing two hour sets that were already mixed and there certainly weren’t any LED walls, it was a huge deal if there was a laser at all. Most of the time the production involved massive sound systems, and the lighting was always there, but to some extent in the background. If you made $ 5,000 you were huge, anyway like a big time for the US, Europe paid better.

If we thought back then that everyone wanted to become a superstar DJ, the numbers are now off the charts. Even Shaq is a DJ now, well, the term DJ should be used loosely there. Very loose. The list of DJ atrocities is a bit like climate change.

What was a DJ doing back then? Well, first of all they didn’t produce like they do today, there were actually DJs who were just great DJs. The producers were more of a wall flower type and liked to be in the shade because they could make some money producing records.

The art of DJing was how well you could mix and what kind of records you had in your box. It was hard to get good records, either you had to have a guy in the record store to hold the items for the day they came in, or you had to be lucky enough to be on promo lists.

Delivery day was always wild with every local DJ buzzing around like a bunch of malnourished sharks waiting for a kayaker. There were maybe 3 or 5 copies of a great record and most of the time they didn’t even make it onto the shelf, they were kept behind the counter for the big boys.

Another downside to being an early 90s / 00s DJ was the fact that singles could cost anywhere from $ 12 to $ 14 for a track. A lot of guys didn’t eat or went broke trying to make it as a disc jockey.

Read what your DJ gear is saying about you

You spent hours and hours and hours locked in your room with your new plastic best friends and learned the art of mixing. Playing vinyl required serious practice and skill, especially when learning to scratch.

Once you got that right, you had to beg your best friend’s girlfriend to play at her birthday party. Getting a gig, any gig, was accomplished simply by wholeheartedly developing a social media strategy with fake metrics (i.e. fake friends, games, followers, likes, etc.).

Back then it was just raw aggression, insane devotion and, if anything, even more hustle and bustle. You still have to hurry up these days, but it’s a gentler rush and based more on fooling people into thinking you are bigger or better than you are.

DJs in the early days couldn’t hide behind fake metrics, you just had to kick your ass on the turntables and be more hectic than the roadrunner when it comes to speed.

Your job and goals were pretty simple, DJ at clubs or raves and getting paid. If you could get that far, the music industry would snap you up, oblige you to create a mix CD, and execute on their blueprint marketing and sales strategy.

The magicians are pissed off … DJs killed their careers in Vegas.

Today it is in a certain way more difficult because there is infinitely more competition, you have to produce in order to be noticed, and there are more places than ever to lose yourself in. How the hell do you jump into this game? We used to be able to see the mountain top; now it’s hidden in the clouds. There is no longer a blueprint, no clear way to get there, no yellow brick road.

I am paid way too much.

What does that tell you Good luck you will need it.