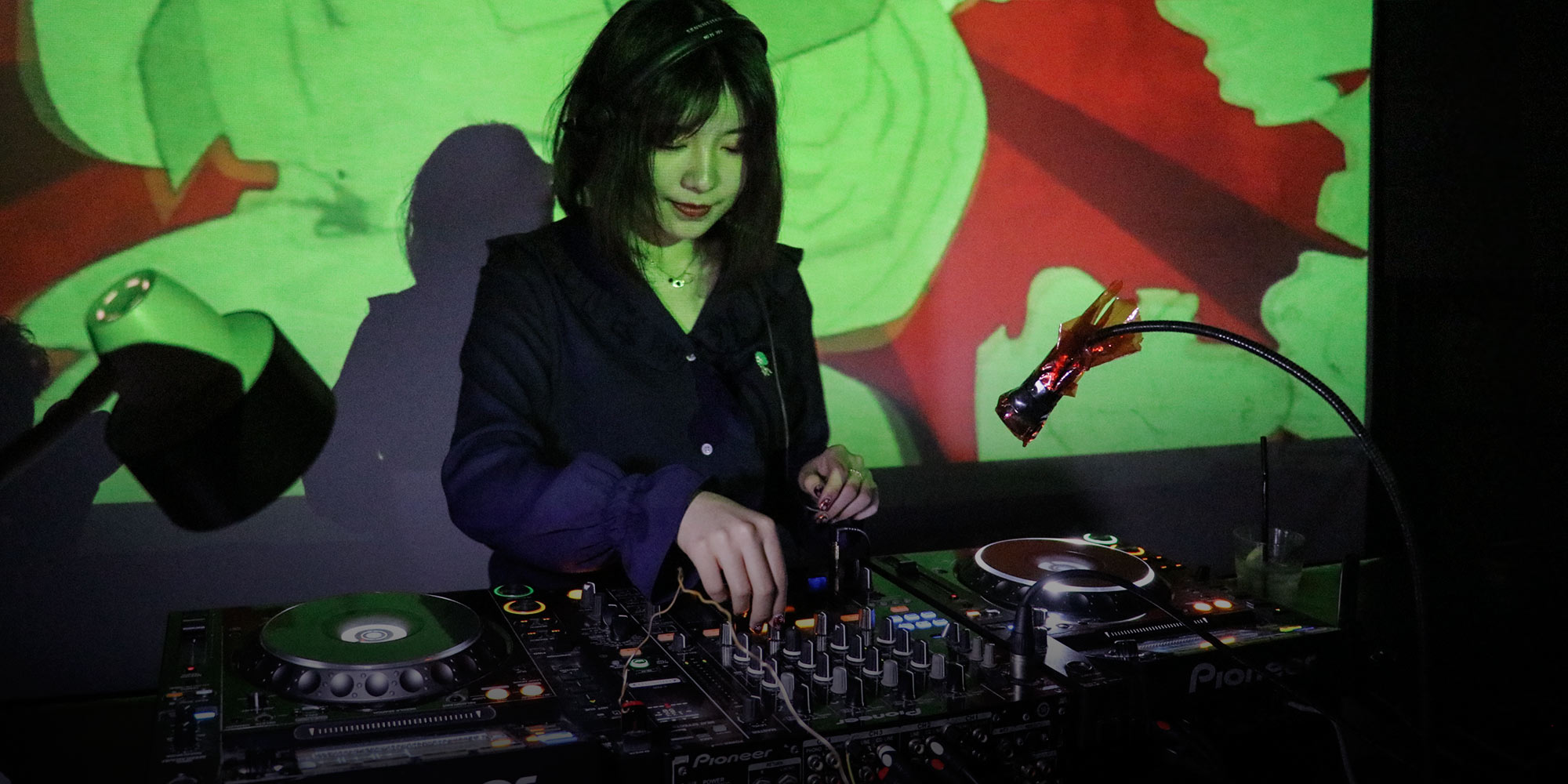 SHANGHAI – On a Friday night in the dead of winter, frozen night owls shuffle into a dark downtown club to warm up with roaring basslines.

On stage, aspiring DJ Gouachi swings with the rhythm as she seamlessly scrolls through a carefully curated playlist, her pale, smiling face framed by a shoulder-length bob. The club goers look at the stage and their master and nod in time to their thunderous beats. Little do they know: Gouachi is only 16 years old.

During the day she is a school girl named Shi Jiayuan, at night she becomes Gouachi, who has already made a name for herself in Shanghai’s underground dance music scene. Shi started listening to electronic music at 13, and when she was 15, she took a 10-week DJ course and occasionally snuck into clubs to listen to her favorite DJs. On a cold December night in 2016, as she was recovering from a broken ankle, she secretly climbed the courtyard wall surrounding her family’s home and took a long and expensive taxi ride to downtown Shanghai. At 4 a.m., she hobbled quietly back to her bedroom as if nothing had happened.

“I really enjoy seeing people dance to the music I put on,” says Shi, “and I also think DJing is really cool.”

Shi is one of a growing number of young Chinese who are learning to play records in DJ schools. Chinese children traditionally have taken piano or violin lessons in addition to their intensive academic schedule in order to remain competitive in applying for middle or high school. But in recent years a growing minority of parents want their children not only to have fun with the music, but also to be cool, confident and stand out from their peers with trendy and “exotic” skills, say the Shanghai DJ instructors .

I really enjoy seeing people dance to the music I put on.

In the beatspot of the Shanghai-based DJ Academy, which is home to several white chinchillas and two cats lounging on the turntables after class, founder Wang Chen has noticed dramatic growth among young students over the past two years. When his school opened in 2011, he only taught adults; now more than half of its current students are under 18 years old, and nearly half of them are under 10 years old. Last year, Wang taught over 140 children under the age of 6 in weekend classes in private schools across Shanghai.

One of his students is eight-year-old Qiao Jinpei, who stares attentively at the digital turntable and drums out funky sound samples with his little fingers as they dance over brightly lit pads. He’s been taking weekly DJ lessons at beatspot for over a year since his mother, Li Jun, who is from Shanghai and married to a French expat, saw videos of children’s DJs on YouTube and decided that it would make her son look cool would. Li hopes her son will enjoy himself through the class – and develop the enigmatic presence of a musician. He’s already taking piano – at the behest of his grandparents – and English lessons outside of school, which he doesn’t like, so Li is relieved to get him to class, which he looks forward to. When asked why he enjoyed learning to DJ, a shy Jinpei replied that the class was “fun.”

Li also wants her young son to stand out from the crowd. “Right now, the piano and violin and sports are very popular in China,” she says. “I want him to learn something different from the other children.” When she posted videos of Jinpei DJing on the WeChat social media app, her mother friends were amazed and curious. “I have so much respect!” says Li before bursting out laughing.

The one-sided culture among well-heeled Chinese parents is one of the main factors behind the rapid growth in children’s DJ classes, says Jiao Ziqi, who goes by the stage name DUBJ. Jiao’s DJ and hip-hop production school EM MUSIC has grown from just a young DJ student a year ago to over 20 today – and now his youngest student is only four and a half years old. Jiao is used to meeting anxious parents asking if his academy can quickly teach their child a piece for exams, the result of an education policy that allows sheet music to contribute to academic test scores. But over the past two years he’s noticed an increasing number of parents who just want their kids to have fun, which means they’re more receptive to a musical hobby like DJing that isn’t inherently suited to sheet music.

I would like [my son] learn something different than the other children.

Li Wenjie, the petite founder of the Dopamin rock music school, agrees that more and more parents want their children to learn instruments for one simple reason: “To be cool,” she says, wearing a new type of shark hat at her school that comes with her decorated black and white graffiti. “Parents these days just want their kids to be cool.”

But teen DJs dream more of sold-out stadium tours than the prospect of impressing their parents – or the school inspectors. In recent years, major international electronic music festivals like Ultra have come to China, and electronic music is the second most popular genre in the country, according to a spokesperson for the popular music app and website NetEase Cloud Music.

Zhou Yuren – a 16-year-old who prefers to be called Zach – first came across electronic music on the internet and was later inspired to pursue the hobby on the recommendation of a friend. Zhou now practices DJing at the beatspot and strives to be like his idol and inspiration: DJ Warz, a Canadian-Chinese trap and bass producer who frequently performs in Shanghai. If Zhou shows potential, his parents will let him indulge in his passion – they’ve already bought him a DJ controller for 7,900 yuan ($ 1,250), a digital turntable with sliders, knobs, and pads that he then practices his sets on finishes his nightly homework.

Chinese youth today tend to speak louder than previous generations about what they want to learn – and parents are more receptive, says Jiao. He points out the parents of one of his students who moved over 2,000 kilometers from the southern island province of Hainan to Shanghai so that their child can learn to DJ. But even if parents let their kids do DJing, most would rather remain a hobby than pursue a career, and studying remains the number one priority, he says.

Cheng Jianyuan, a 14-year-old student at beatspot, is a case in point. He was fortunate to have parents who agreed to let him hang up and pay for the course. He says most parents in China would probably still prefer their child to learn an ordinary instrument – when parents mention DJs, parents immediately think of “chaotic” bars and clubs. His parents support his hobby, but don’t think that it should come at the expense of his school grades.

Parents these days just want their kids to be cool.

When Shi, the 16-year-old amateur DJ, told her parents about the 5000 yuan course at the local music studio, CTRL Sound Academy, they couldn’t see the value and thought it would have a bad impact on their daughter. After much argument and a long, heartfelt letter explaining why she wanted to take the course, her parents finally gave in and paid the fee. Her mother has meanwhile warmed up for her daughter’s hobby, full of gifts that Shi buys for her with the money from concerts. But by no means all: Her father remains unimpressed, and at school Shi sees some of her classmates as “bad girls” and “little punk” because of their hobbies.

Despite the increasing interest, there are limits to the growth of the DJ school trend. Many young people in China prevent them from engaging in time-consuming hobbies just for fun. Shi is studying fine arts in a vocational school as she does not have the local Shanghai Hukou – or household registration – required to attend a regular high school, which means she has more free time to practice and perform. Shi’s cousin, on the other hand, is up to her neck on homework while aiming for a high score on the gaokao, the notoriously difficult nationwide college entrance exam. She has no time for non-academic hobbies – and certainly not for those that appear in bars late at night. Meanwhile, Zhou is studying for the SAT at a private school to prepare for university abroad; The curriculum is easier than preparing for the gaokao, so he has more free time to refine his craft.

There is another potential problem: hip-hop, which Jiao suspects was a surge in student DJing, was recently banned from Chinese television to crack down on indecent pop culture. If electronic music – a genre that many still associate with bars and drugs and that has suffered unexpected event cancellations in the past – provokes government wrath, the image of DJ artists could suffer. But the young hopefuls of DJs think this is unlikely and point to the positive energy of electronic music and the lack of lyrics, whether controversial or not.

At the moment, nothing gets in the way of the newly discovered supporters of the DJ school. Li Jun, the young mother of 8-year-old Jinpei, plans to continue taking her son to class – and is open to his becoming one of China’s future electronic music superstars.

“If one day he can become a DJ – a real DJ – I will of course be happy for him,” she says. “He could make music up there and I’ll dance down there.”

Correction: In a previous version of this article, Qiao Jinpei’s first name was misspelled as Jinpai.